We are playful, cute and intelligent, We thrive on human companionship and need vigorous exercise to dispel our boundless energy. We are loyal to our family and love the little people.

We have dryer skin than the other hounds around town and we are dirt proof. Throw mud on me and I’ll shake it off and still shine like a new shiny red firetruck, only white of course!

We’ve been riding firetrucks for like, forever. They made movies about us, they make toys that look like us. Heck, I’m so cute, lovable and popular I can barely contain myself.

Dal is Short for Dalmatian

Unique spots are the Dalmatian’s calling card, but what made him famous was running. His ability to tirelessly run for miles led to breeding him as a Coach Dog; the only dog known to have such a title. What is a coach dog? It is a breed of dog trained to run alongside carriages or horseback riders for miles. His job was to discourage stray dogs from interfering with the horses, alerting the coachman to the presence of approaching highway traffic, and guarding the carriage when parked. They were a dog of royalty or upper class, as they were the only one who could afford carriages and they usually traveled in pairs. Upon the invention of people and horse drawn fire apparatuses, the Dalmatian proved once again to be invaluable in clearing the way for the fire brigade. The Dalmatian has also been used for a war dog, fire department mascot, shepherd, vermin hunter, hound dog, guard dog and a circus performer, which is where he gets his clown like personality.

The Dalmatian gets its name from Dalmatia, in what is now Croatia located on the eastern coast of the Adriatic Sea. Development of the modern Dalmatian took place mainly in England. He has been used as a hunting dog and may be related to the English Pointer. The dog’s history goes way back possibly to the 13th century. But, its popularity began in Dalmatia. The American Kennel Club recognized the Dalmatian in 1888, and the Dalmatian Club of America was formed in 1905. The breed currently ranks 69th among the breeds registered by the AKC. 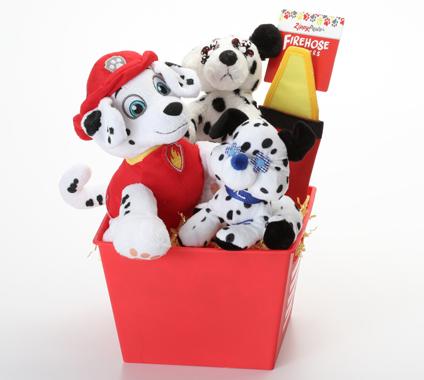 Dalmatians are high energy dogs. They are clowns at heart and love to perform gorky antics. Toys and chew toys are a must to keep them entertained.

The Dalmatian smile is widely known among Dalmatian owners. People not familiar with this attribute may be wary of a dog showing its teeth. The Dalmatian smile is not a show of aggression. It can be a greeting, a sign of happiness or bashfulness when they’ve been up to no good. Here is a short slow-motion video of Zoey showing off her pearly whites. 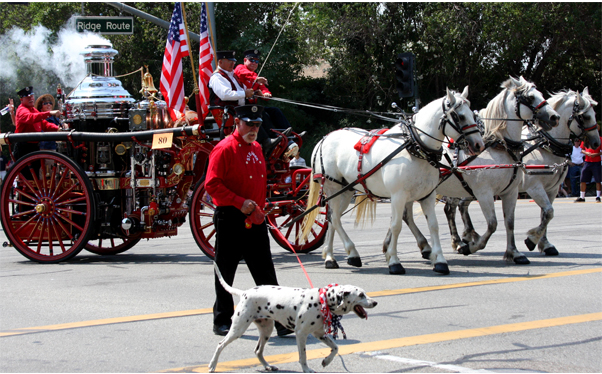 Although the origin of the Dalmatian’s coat pattern is not known, it is one of the most interestingly patterned breeds. Paintings of dogs resembling the Dalmatian have been found throughout the centuries. One such painting, a fresco from 1360, is held in the Spanish Chapel of Santa Maria Novella in Florence, Italy.

It is thought the ancestors of the Dalmatian may have been pointers and the spotted Great Dane. And while it did not originate in Dalmatia, a southern region in Croatia, the breed did derive its name from the region. Even the Dalmatian’s original function is obscure, but the breed probably had more than one role. Throughout the years, it has been a shepherd, a war dog, a sentinel, a retriever, a draft dog, a ratter, a trailer, a bird dog and a circus dog.

In Victorian England, the Dalmatian served as a coach dog, fulfilling both the aesthetic and practical roles — protecting horses from marauding dogs. The dogs trotted in front, alongside, or below the axle of the coach. There is now evidence that the coaching role may have been a hereditary factor.

The introduction of the automobile dimmed the Dalmatian’s position in high society, but it continued to work as a coach dog for fire engines, which were drawn by horses. It was known as the “fire-dog.” The first Dalmatian was registered with the American Kennel Club in 1988 and the breed’s U.S. Club, the Dalmatian Club of America, was founded in 1905.

The temperament of a Dalmatian tends to be loving, energetic, and athletic. Because of their high energy levels, they need an owner that is able to take them out on a regular basis and that can give them an active lifestyle. Another important thing to note is that Dalmatians love to be around their owners. Whether you’re cooking in the kitchen or lounging on the couch, you can expect your Dalmatian to be right by your side wherever you go. While this breed does not tend to be aggressive, they are excellent watch dogs and will warn their owners of an intruder if the occasion arises.

Dalmatian puppies are born with all white coats and their first spots usually appear within 10 days. Spots continue to develop in the first 18 months. Spots usually range in size from 1.25 to 2.5 inches,, with the most common being black followed by brown (liver) on a white coat. The liver spots are the recessive color in Dalmatians, that means both parents have to “carry” the liver gene to produce liver pups. If both parents are liver, then all puppies will have liver spots.

There are other colors that pop up now and then, which are considered faults. They include brindle, blue (a blue-grayish color), orange or lemon (dark to pale yellow), tricolored (with black, liver & orange/lemon spots) and mosaic, none are within breed standards. Another coloration fault is a large solid patch of color, which can appears anywhere on the body, but most often on the head, ears, or tail. Patches are visible at birth and are not a group of connected spots; they are identifiable by the smooth edge of the patch.

There are two types of Dal coats; long haired and short haired (smooth coat) The standard Dalmatian coat is the smooth coat usually short, fine, and dense; however, smooth-coated Dalmatians can produce long-coated offspring. Long hair Dalmatians are not acceptable in the breed standard, but there is a plus with this coat as they shed much less than the smooth-coat, which shed year-round. The standard variety’s short, stiff hairs often weave into carpet, clothing, upholstery, and nearly any other kind of fabric and can be difficult to remove. Weekly grooming with a dog mitt or brush can lessen the amount of hair Dalmatians shed. Due to the minimal amount of oil in their coats, Dalmatians lack a dog odor (“dog smell”) and stay fairly clean relative to many other dog breeds.

If you need more info about the Dalmatian or have questions about getting a puppy, please contact us using this form. Thank you for visiting Dalmatian Station.